What is a Coombs' test? 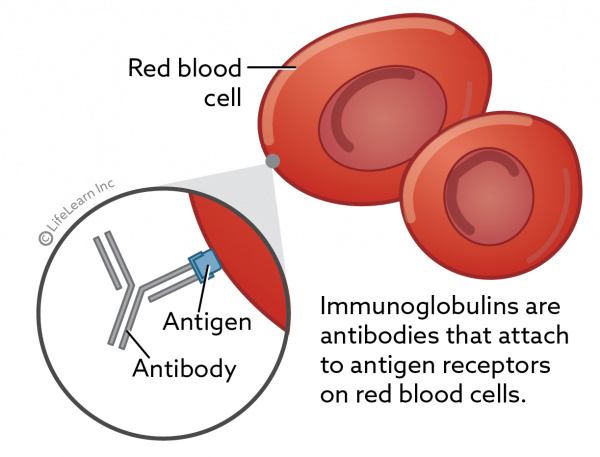 A Coombs’ test is used to test for a disease called autoimmune hemolytic anemia (IMHA). IMHA is a condition where the immune system breaks down or destroys red blood cells, leading to anemia.

A Coombs' (or direct antiglobulin) test detects the presence of immunoglobulins (antibodies) on the surface of red blood cells. Immunoglobulins are proteins made by white blood cells (specifically plasma cells).

The causes of IMHA can generally be divided into two categories, which are primary (also called idiopathic) and secondary.

With primary IMHA the underlying reason that antibodies are being produced against an animal's red blood cells remains unclear or unknown. With secondary IMHA the production of antibodies against red blood cells is secondary to another condition such as infection, allergy, inflammation, or neoplasia (benign or malignant tumors). Certain drugs are known to trigger IMHA in susceptible animals; however, the effects of these drugs on individual animals cannot be predicted.

Are there any other ways to diagnose immune mediated hemolytic anemia?

The condition will be suspected in any animal that has clinical signs such as pale gums or unexplained weakness, and characteristic laboratory evidence of immune mediated red blood cell destruction.

"The Coombs' test may provide further confirmation of the presence of
immunoglobulin on the red blood cell surface."

Taken together, the physical findings and the laboratory data may suggest that immune-mediated destruction of red blood cells is the most likely cause of your pet's anemia. The Coombs' test may provide further confirmation of the presence of immunoglobulin on the red blood cell surface.

What does a positive test result mean?

What does a negative test result mean?

A negative result can indicate that your pet does not have IMHA. However, it is important to know that a false negative Coombs' test result is seen in approximately 10% to 30% of dogs with IMHA. False negatives occur because red blood cell hemolysis can occur with as few as 20 to 30 molecules of antibody attached to the red blood cell, whereas the Coombs' test requires the presence of more than 200 to 300 molecules before a positive result is noted.

Recent treatment with steroids may cause a Coombs' test to be falsely negative.

© Copyright 2020 LifeLearn Inc. Used and/or modified with permission under license.