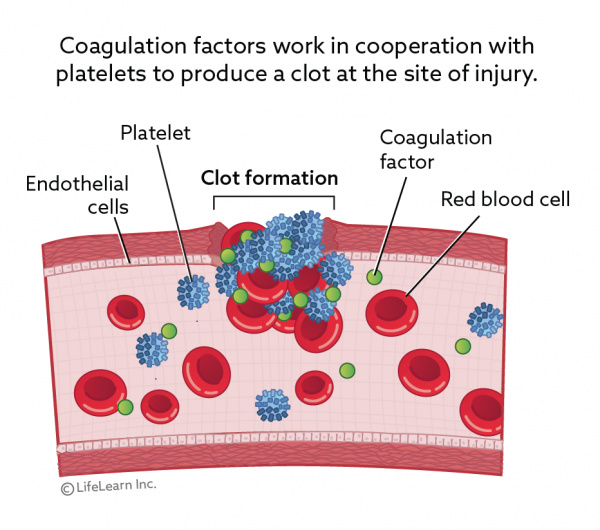 Coagulation is the series of events that result in the formation of a clot. In the body, coagulation occurs after any injury to a blood vessel or tissue, in order to stop bleeding.

What are coagulation factors?

Coagulation factors are substances that are made in the liver and circulate in the blood stream. They become activated when blood vessel or tissue injury occurs, and in co-operation with platelets, produce a clot at the site of injury.

There are thirteen different coagulation factors. These factors are activated in a specific sequence, following two different pathways or sequences (the intrinsic and extrinsic pathways), and a final common pathway.

In the body, there is interaction between the intrinsic and extrinsic coagulation pathways. In the laboratory, the activity of the coagulation factors making up these pathways is measured separately.

When are coagulation tests performed?

"If a pet experiences episodes of bleeding for an unknown reason,
evaluation of clotting function should be undertaken."

If a pet experiences episodes of bleeding for an unknown reason, evaluation of clotting function should be undertaken. Severe liver disease may lead to problems with blood clotting because the liver is the site of production of coagulation factors.

Are there any screening tests that can be used in the veterinary clinic to evaluate coagulation?

Yes. The most commonly performed test is the evaluation of platelet numbers. Platelets are blood components that are involved in the formation of platelet 'plugs' at the site of blood vessel injury. Platelets not only provide the initial patch at injured sites, they also form a framework that allows coagulation factors to accumulate at the injured site and subsequently form a more permanent fibrin clot.

Platelet numbers can be determined readily, and only a single blood sample is needed. Platelets are usually evaluated as part of a routine complete blood count (CBC) that also evaluates the red blood cell and white blood cell components of blood. A marked decrease in total platelet numbers (termed thrombocytopenia) may result in episodes of bleeding. There are many causes of thrombocytopenia, including immune-mediated disease, bone marrow disorders, and infectious causes, among others.

"There are many causes of thrombocytopenia, including immune-mediated disease,
bone marrow disorders, and infectious causes, among others."

While changes in the red and white blood cells on a CBC do not provide specific information about coagulation, they may alert your veterinarian to investigate further. A reduction in red cell numbers (anemia) may occur as a consequence of coagulation factor or platelet deficiency, while changes in the white blood cell numbers or types may indicate an underlying inflammatory condition that may be responsible for the thrombocytopenia.

Because clotting factors are made in the liver, and because many diseases can result in thrombocytopenia, a serum biochemistry panel that evaluates liver function may be helpful.

The buccal mucosal bleeding time (BMBT) is a test which can be performed in your veterinary hospital and which evaluates the ability of platelets to form a platelet plug. A spring-loaded cassette is used to produce a small, precise cut on the inside of the upper lip and the length of time required for bleeding to stop is measured. This time may be lengthened by a decreased platelet count or by decreased platelet function. The BMBT is usually reserved for patients that have normal platelet numbers but have questionable platelet function.

The activated clotting time (ACT) test can be also performed in the veterinary clinic. To perform this test a blood sample is added to a special ACT tube containing a substance (usually diatomaceous earth) that activates the coagulation factors in both the intrinsic and common pathways. A severe decrease (less than 5% of normal activity) in these clotting factors or a severe decrease in platelet numbers will lead to an increase in the length of time it takes the blood to clot after it has been added to the ACT tube. The ACT is not very sensitive to milder decreases in clotting factors.

What specific tests are used to measure the activity of coagulation factors?

These more specific coagulation tests are sent to a veterinary or hematological (blood) reference laboratory and require a single blood sample.

The activated partial thromboplastin time (PTT) measures the functional activity of the coagulation factors involved in the intrinsic and common coagulation pathways. The PTT measures the time that it takes for a fibrin clot to form after calcium and an activator are added to a blood sample.

The prothrombin time (PT) measures the functional activity of the coagulation factors involved in the extrinsic and common pathways. The PT does this by measuring the amount of time it takes for a fibrin clot to form after calcium and a tissue-activating factor are added to a blood sample.

Because of the specific factors involved in the extrinsic coagulation pathways, an increase in PTT is often noted with conditions such as vitamin K deficiency and rodenticide (rat poison) toxicity.

The thrombin time (TT) measures the functional activity of the common coagulation pathway, and more specifically of fibrinogen. The conversion of fibrinogen to a fibrin clot is the end point of both the intrinsic and extrinsic pathways in the body. Both pathways converge to the final common pathway that results in fibrin clot formation.

The TT measures the amount of time it takes for a fibrin clot to form after calcium and thrombin (a coagulation factor) is added to a blood sample.

"Von Willebrand's disease is one of the most common hereditary bleeding disorders of dogs, affecting over 50 breeds and resulting in variable deficiencies of this factor."

In addition to von Willebrand's factor testing, can the individual coagulation factors be evaluated?

Which of the tests described above is used first?

Coagulation testing is not usually done by itself. Typically, a CBC and a biochemical profile are first evaluated. Then a coagulation panel consisting of a combination of PT, PTT, and possibly von Willebrand's factor testing is performed.

The combination of results from these coagulation tests will indicate what part of the coagulation pathway is affected. Once these results have been assessed, the need for additional testing can be determined.

Are there tests that evaluate the ability of the body to inhibit or counteract coagulation?

Yes. There is a delicate balance between coagulation of blood and the dissolution or breakdown of blood clots. If such a system were not in place, instead of clots forming only at the site of injury, widespread clotting could occur to the detriment of the animal.

Antithrombin III is one of the most commonly measured inhibitors of the coagulation system. While measurement of this protein requires only a single blood sample, antithrombin III determination is performed only at specialized laboratories. Antithrombin III measurement is usually undertaken if a pet is at risk of increased coagulability (increased chance of clot formation). Increased coagulation of blood may be a complicating factor of many diseases including cancer, severe inflammation, Cushing's disease, and kidney disease.

© Copyright 2020 LifeLearn Inc. Used and/or modified with permission under license.